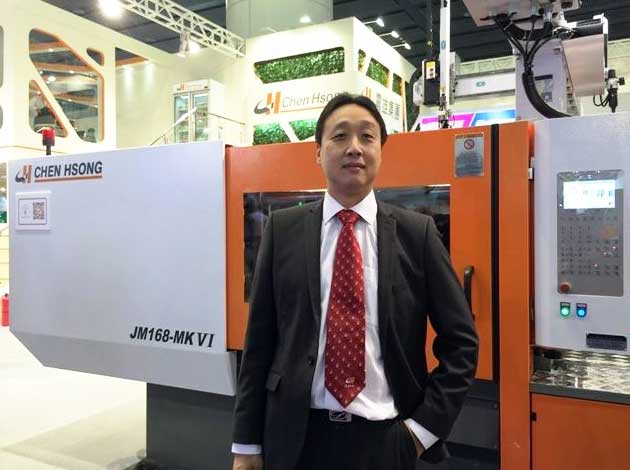 Today, faced with a rapidly changing market for its machines, the company is focused on a shifting its strategy to make a financial comeback, and to embark on a new stage of development.

Over its 57 years of industry tenure, Chen Hsong has not only built its own business, but also has been the training ground for industry executives — including some who have started their own companies and now are top players in the field.

But the Hong Kong-based publicly traded company reported a 15 percent drop in sales for the latest fiscal year that ended on March 31. Net profit tumbled 77 percent, according to a June 25 filing with the Hong Kong Stock Exchange.

“Frankly, we haven’t been doing very well,” said Stephen Chung, executive director and group chief officer of strategy, sales and marketing, in an interview at Chinaplas.

Chen Hsong’s roots in Hong Kong helped in the days when exports dominated China’s manufacturing sector, but now they have been a drag as the company has been slow to adapt to China’s new domestic-focused manufacturing and the shift of business power from Hong Kong to the mainland.

“In the past, South China was export oriented, and many of our customers were large-scale, Hong-Kong- and Taiwan-owned factories on the mainland. Now the market is dominated by domestic demand and Chinese domestic companies,” he said.

And those are neither small nor easy changes.

“Customers now have different usage habits and different requirements for product features,” Chung explained. “In the past, customers had experienced factory workers and technicians with decades of experience and could make the finest adjustments to tap the machines’ fullest potential for the specific products. Today, with labor shortage, hiring and training challenges in China, factories need ‘fool-proof machines’, not complexity.”

The large scale and high turnover nature of the Chinese manufacturing model demands standard machines that are easy to use and require minimum service, he said.

“Customers expect machines that need zero adjustment and zero service. In the past, some customers used 100-ton machines to make products that were supposed to be made on 150-ton machines. They didn’t mind the need for service and maintenance under heavy [and perhaps improper] usage, but things are different now.

Chung, a low-profile executive who’s been with Chen Hsong since 2001, said with candor that the company is committed to changing and improving.

“It’s been painful, and we have to transform based on market changes,” he said.

The company noted that the Chinese economy is at its 24-year-low and “at a crossroads between new and old market dynamics.” The global market, with the exception of the United States, also shows a gloomy outlook, according to the filing.

More than 58 percent of Chen Hsong’s sales come from mainland China and Hong Kong, 6.3 percent from Taiwan, leaving about a third from other overseas countries. While mainland China took a 23 percent hit on sales, Taiwan was the worst performing market, as sales shrank by 32 percent because the island economy is more dependent on exports, especially to the United States and Europe.

The 2014 financial results echo Chung’s comments on the company’s lagging behind market changes.

“The group’s traditional product lines suffered as a result of not responding fast enough to such market changes and rapidly emerging new demands,” the report said.

Chung acknowledged the need for changes all around.

“We need to change our business style, the way we do things, change our product offerings, etc.,” he said.

The company is developing new products that fit the latest needs of Chinese manufacturers. Chen Hsong said it will “further introduce an all-new-design, sixth-generation, MKVI series as its main flagship product line for the coming several years.

“This new product line was designed with the ‘New Normality’ in mind, tailor-made for new market segments, highly-competitive, and should succeed in recapturing lost market share in the near future.”

The new line will be fully launched by the end of 2016 and Chen Hsong believes it will “meet high expectations and bring about new market breakthroughs.” 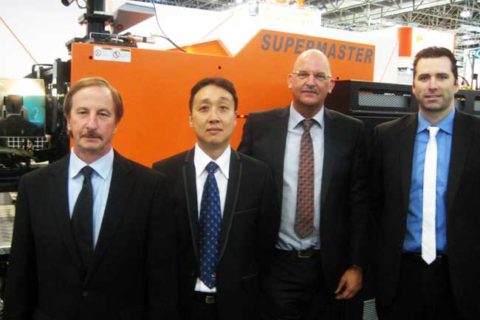 The Chen Hsong Group has offices and distributors all around the globe.
Select your region from below or search our global list of distributors.
China简体中文 IndiaEnglish BrazilPortuguês North AmericaEnglish Taiwan繁體中文
×